My first week back of this half-term started with a training day at school, delivered by Chris Henley, co-author of the book ‘The Art of Being a Brilliant Teacher’. The main point of the day was to help our school develop a culture of positivity by teaching us techniques for creating positive relationships with the students. Chris definitely did have an infectious enthusiasm and optimism about things and I left the (freezing cold) hall on Monday at 2.45pm eager to start the new half term with the same sense of optimism and positivity. Spoiler alert: this positivity did not last long.

I did try to stay positive, I really did. I did manage it for most of the week, however there were some exceptions when I lost it, which I will get to later. First, a few memorable moments from the week.

The second lesson of the day on Tuesday was a purifying water practical with year 9. This is a practical where students have to heat various samples of water using a bunsen burner and measure the mass of dissolved solids in each sample. But of course no practical is ever without its difficulties. This one was made particularly challenging by the fact that due to a recall of gauzes last year because of fears they contained asbestos, our school currently has no gauzes. If it has been a long time since your science lab days, a gauze is the thing which sits on top of the tripod and below the beaker of water. The replacement we were using on Tuesday was a clay triangle; a triangle too small for the tripods which the beakers were precariously placed on top of. This led to a student knocking the beaker off later in the lesson, splashing hot water everywhere, although miraculously not smashing it. Just as well it didn’t smash really, as there was still glass in the sink from the measuring cylinder the same student knocked over earlier in the lesson. Oh as well as that, there were issues with the gas taps so it took many attempts before we could even light the bunsen burners at all.

Anyway, it wasn’t all bad that lesson as one of the girls did tell me randomly “You have really good eyebrows.” Although she didn’t seem to understand why telling me this while I was trying to walk around the classroom, helping to light bunsen burners and stop beakers of hot water from falling over, was maybe not the best time for this compliment.

Other notable moments this week include so many comments about my new classroom clock. The clock that was in my classroom when I first started last year stopped working half way through the year and so I took it down and have just had an empty space on my wall ever since. But partly due to the fact I was getting fed up of answering the question “What time is it?” and also partly because I was peer pressured by students into buying a replacement clock, I decided to finally buy one during half term. While faced with an array of clocks in Wilkos, I was torn between a boring, classic, white school-type clock for £3, or a bright red one for £6. In the end, I decided to splurge an extra £3 on the red clock, trying to add some colour into my classroom. I never realised how much this clock mattered to me until I suddenly felt very protective of it this week when people were being mean about it, saying it didn’t fit in at all and even calling it ugly. Kids can be so mean.

But so can I apparently. Or at least I can be in one particular lesson: period 5 on a Friday with my year 7 class. I actually wrote about this class in my last blog post, where I included examples of the kind of pointless things they say and then a ‘what I wish I could have said’ comment. Except this week, the line was kind of blurred between what I wish I could have done and what I did… oops.

Right from the start of the lesson, this one girl had been asking if she could leave the lesson a few minutes early because she needed to get her things from her locker, which was on the other side of school, before catching her bus. Apparently her Mum had said that she could leave lesson a few minutes early. I wasn’t sympathetic however, because that lesson is straight after lunch and she had plenty of time to go and collect her stuff during lunch, rather than leaving my lesson early. Plus, why should I let her leave early without any proof? After telling her these reasons, she then proceeded to give me a note ‘from her mum’ which read “My daughter will be allowed to leave early.” Nice try.

When she handed me this note, I was already annoyed at the rest of the class as they were being their usual disruptive selves, so I just had no patience. Which is why I took the note with great interest, before ripping it up in front of her with great enjoyment. What have I become? 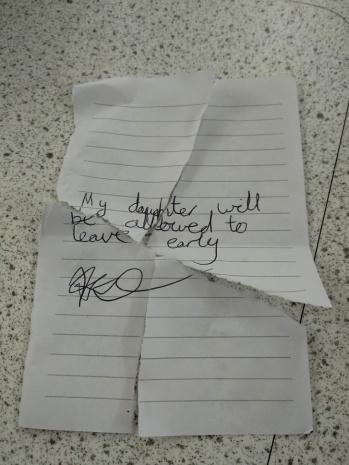 Anyway, next week is a new week, with lots more opportunities to try and create some positive relationships with students. Will I manage to stay positive next week, during a full five days and another parents evening? We shall see…

One thought on “Falling beakers and forged notes”